Living in Parodox: It is the best of times; it is the worst of times.
Wealth of richest 1% ‘equal to other 99%’ 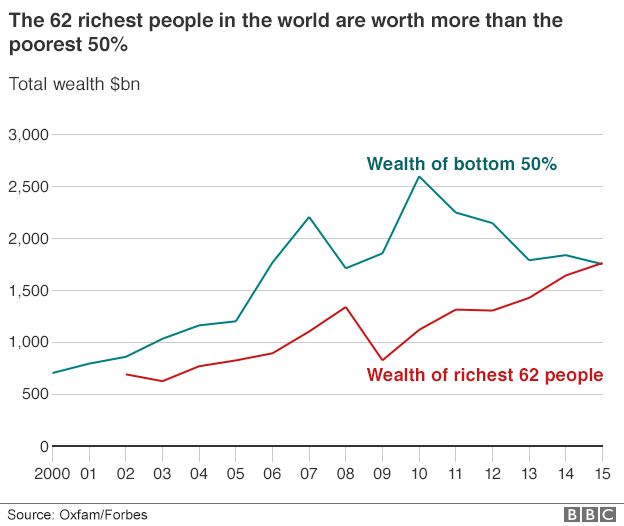 BBC  Business News — The richest 1% now has as much wealth as the rest of the world combined, according to Oxfam. It uses data from Credit Suisse from October for the report, which urges leaders meeting in Davos this week to take action on inequality. Oxfam also calculated that the richest 62 people in the world had as much wealth as the poorest half of the global population.

It criticised the work of lobbyists and the amount of money kept in tax havens. Oxfam predicted that the 1% would overtake the rest of the world this time last year.

The figures carry various caveats, for example, information about the wealth of the super-rich is hard to come by, which Credit Suisse says means its estimates of the proportion of wealth held by the 10% and the 1% is “likely to err on the low side”.

As a global report, the figures also necessarily include some estimates of levels of wealth in countries from which accurate statistics are not available. Oxfam said that the 62 richest people having as much wealth as the poorest 50% of the population is a remarkable concentration of wealth, given that it would have taken 388 individuals to have the same wealth as the bottom 50% in 2010. (01/17/2016)

This entry was posted on Sunday, January 17th, 2016 at 9:31 pm and is filed under Economics, Politics, The Internet. You can follow any responses to this entry through the RSS 2.0 feed. Both comments and pings are currently closed.