Living in Parodox: It is the best of times; it is the worst of times.
Descendant of the Hippocrates’ Tree Saved and Cloned 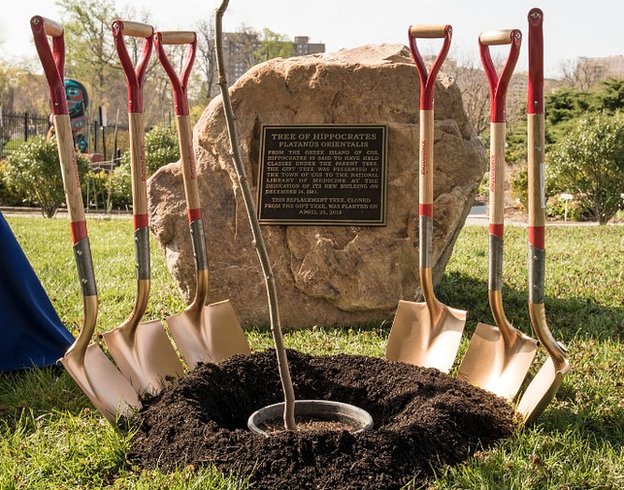 BBC Biological Scence — Jane O’Brien reports: Legend has it that Hippocrates, the ancient Greek “father” of medicine, taught his students under a tree on the island of Kos.

More than 25 centuries later, experts in the US have produced the first DNA barcode of the Oriental plane that is believed to be its descendant. The original tree died centuries ago but the Greeks believe one of its descendents grows in the same place.

“In terms of symbolism this is huge,” said team member Amy Driskell. Dr Driskell manages the Smithsonian’s Laboratories of Analytical Biology, which carried out the barcoding.

Hippocrates invented the idea that people with the same disease exhibit similar symptoms which produced similar outcomes. His book, Prognosis, was the first to compare cases in an organised study and remains the basis of the theory of modern medical diagnosis.

Cuttings from this 500-year-old tree, a member of the Oriental plane tree species, have been presented as gifts to major medical institutions all over the world. One was planted at the National Library of Medicine near Washington DC (part of the National Institutes of Health – NIH), when the building opened in 1962 – and the DNA barcode was created from this tree. Barcodes are fragments of DNA that are unique to individual species and serve as their genetic fingerprint. More than 200,000 have been collected as part of the DNA Barcode of Life Project which aims to create a database of barcodes from every species on Earth. The Hippocrates Tree at the National Library of Medicine has become the source of the first barcode for the Oriental plane tree species. …

“I’m sure that Hippocrates would have been fascinated by the DNA Barcode Project and I think he would have been very excited about how DNA comparison and other modern methods are being used to better understand and ultimately treat human disease,” said Dr David Lipman, director of the National Library of Medicine’s National Center for Biotechnology Information.

But it very nearly didn’t happen. In 1990 NIH chief landscape architect Lynn Mueller noticed the tree’s health was declining and by 2003 it was almost dead. He began a desperate quest to find ways to clone the tree and save one of the few tangible links to Hippocrates in the US. Nurseries around the country were given cuttings, but all failed to take. Eventually he contacted the Archangel Ancient Tree Archive in Michigan where experts managed to produce several clones. “A new growth clipping is taken from the plant and the end is submerged in different rooting hormones to encourage new cell growth,” said Mr Mueller. “They’re put into a special soil which is sterilised – and we have our new trees.”  (04/28/2014)

This entry was posted on Monday, April 28th, 2014 at 7:34 am and is filed under Best of Times, Science, The Internet. You can follow any responses to this entry through the RSS 2.0 feed. Both comments and pings are currently closed.