Living in Parodox: It is the best of times; it is the worst of times.
Walking and Jumping Plant Spores 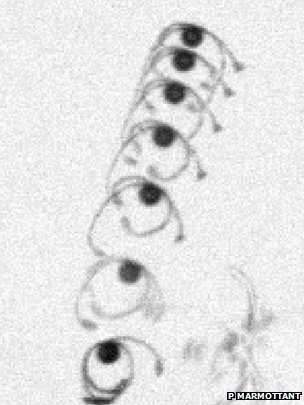 This revealed that the microscopic spores’ “legs” curl and uncurl when the moisture levels change, causing them to appear to crawl around or even to spring from the ground. The findings are published in the Royal Society journal Proceedings B.

Lead researcher Dr Philippe Marmottant from Joseph Fourier University, Grenoble, explained that the motion of plants provides natural inspiration for self-propelled devices. Jumping enables the spores to enter wind currents, which they use to disperse over large distances

“If you think of a carnivorous plant, [like a Venus flytrap] their motion can be quite fast,” Dr Marmottant told the BBC. “So I was interested in finding new types of motion in plants, and a friend who is a biologist told me about these very special plant spores that have a motion driven by humidity.”

When Dr Marmottant examined the spores under the microscope, he saw their movement. But it was only when he combined the microscope with a high-speed camera that he revealed that the plants were not only moving, but walking and jumping. …

Before this study, it was not clear what the function of the spores’ leg structures was.

“People assumed they were like wings, so they would help dispersal into the wind,” explained Dr Marmottant. “But here we show they actually induce motion on the ground.

“And more importantly, they also enable jumps, which means [the spores] can enter the wind currents. And once you’re in the wind current, you can travel long distances, which is an evolutionary advantage, because it means you can disperse your seeds very widely.”

Horsetail plants, which grew when dinosaurs roamed the Earth, are still found all over the world today. But only now have researchers discovered the strange secret of their mobility, which has helped them disperse so effectively and become so prevalent. (09/11/2013)

This entry was posted on Wednesday, September 11th, 2013 at 11:39 am and is filed under Science, The Internet. You can follow any responses to this entry through the RSS 2.0 feed. Both comments and pings are currently closed.