Living in Parodox: It is the best of times; it is the worst of times.
Kicking the Can Down the Road 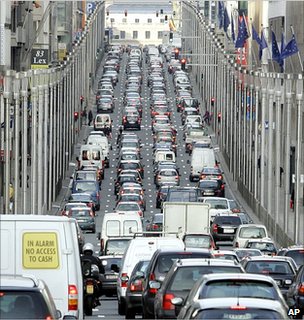 BBC Environmental Science — The European Commission will not call for tougher targets on carbon emissions despite analysis showing that doing so would be cost-effective. On Tuesday the commission will unveil a road-map on climate and energy policy.

Its own analysis said that an EU target of a 25% cut by 2020 could easily be met, and would be economically better than the existing target of 20%. However, a senior diplomatic source has told BBC News that the final version will explicitly urge sticking at 20%. The news has disappointed climate campaigners who accused heavy industries of “scaremongering”.

The commission is also set to recommend that some of the 20% reduction can be achieved through buying emission credits from overseas, rather than entirely through cuts at home. …

Environmental groups have urged that in order to meet its “fair share” of global emissions cuts, and to re-invigorate the UN process, the EU should be contemplating 40%.

But energy commissioner Gunther Oettinger recently declared that going above 20% would lead to the “de-industrialisation” of Europe.

“Yet again it seems the scaremongering tactics of a handful of well connected industrial lobbyists have successfully castrated Europe’s climate ambitions,” said Baroness (Bryony) Worthington, director of the campaign organisation Sandbag. “The smokestack industries of Europe are wrong when they claim that the only way to meet our targets is through de-industrialisation; investing in new clean energy technologies will actually boost economic activity,” she told BBC News. “They also fail to mention that many of them are handsomely profiting from the sale of spare emissions permits which leave them largely untouched by requirements to reduce emissions.”  (03/07/2011)

This entry was posted on Monday, March 7th, 2011 at 5:37 pm and is filed under CRAZY, The Internet, Worst of Times. You can follow any responses to this entry through the RSS 2.0 feed. Both comments and pings are currently closed.